This is a bit more linear than what I’d tend to write, and that’s for simplicity. Good for a short one shot maybe. If not, consider putting it into your wider world, relocating it to be next to another small location and connecting them somehow into a larger Job site. Maybe a tunnel or sewers in the basement.

The Rookery stands alone on a cliff, its crooked tower scratching at a heavy, clouded sky. It is a postal office, used by the House to send missives between various colonies and seats of power.

Your graverobbers are going to break into the Rookery tonight because:

1. A package has arrived that must be intercepted before morning.
2. A letter has arrived that must be read, but not diverted from its address.
3. A letter must be sent overnight to a spy in the House. If sent by day it may be inspected.
4. The official seal of the Postmaster would make invaluable forgeries. Copy it perfectly.
5. The trained ravens of the nest could be used to our advantage. Kidnap one.
6. A local shaman senses unrest beneath the tower. Investigate the House’s latest sacrilege.

Give each player their own goal if you’d like. 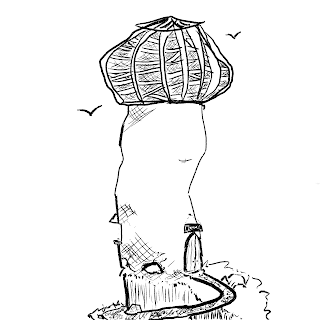 The Rookery is approached by a winding road that encircles the cliff it stands on. The road passes beneath a ground floor window at the back before coming round the bend to the front door. Two guards stand on duty here by night - guard changes at dusk and dawn. Light comes from the window and the door.

The tower is topped with a huge, vaguely spherical birdcage, made of an uneven lattice of strong iron bars. There is no gap up here large enough for anything bigger than a raven to slip through, something obvious enough to see by moonlight. 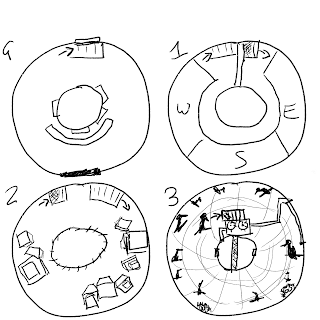 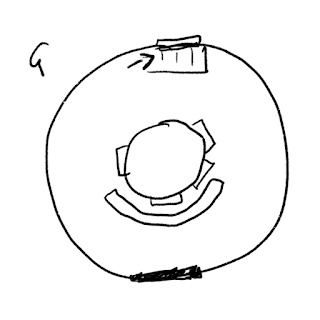 The Foyer: The foyer is circular, taking up the whole ground floor. It is the only lit room in the Rookery, with two torches burning in the east and west walls. A thick pillar of stone marks the middle of the space, with a series of shelves put up against it and a desk in front of those. The desk, by night, is unmanned. On the desk is a note:

There is a postal worker’s uniform folded up on one of the shelves, as well as stacks and stacks of postage stamps and seals. On one shelf, little brass keys hang on hooks, both the key and their respective hook each labelled E and S. The hook labelled W has no key.

Stairs at the back of the room on the north side lead up past a large window to the offices above. There is guano on the floor and on the windowsill. 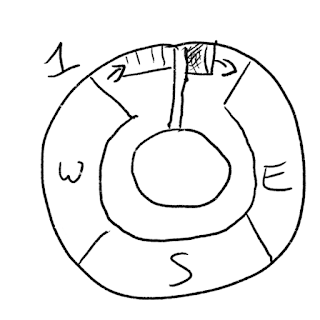 The Offices: The next floor up. A corridor leads all the way round the central pillar to the next set of stairs, past three doors set into the outer wall. They are labelled, in turn, E, S and W, for the cardinal directions they are facing. The keys downstairs open their respective doors.

In E: Parcels line the walls, organised by some obscure rule into various cubbyholes. The parcel the players may have been sent to intercept is not here.

In S: Letters are placed in files. The letter the players may have been sent to read is not here.

In W: This room is nicer, with an armchair and a stack of books beside a large writing desk. One of the books details the magic needed to forge silver manacles which bend the wearer to the will of one marked with a specific sigil. One person may command one manacle, but the magic is not strong enough to control a mind more complex than a small animal’s.

On the desk are a letter opener, small red candles and the postmaster’s seal. The letter and parcel the players may be looking for are both here.

At the far end of the corridor, stairs lead up to the stores. 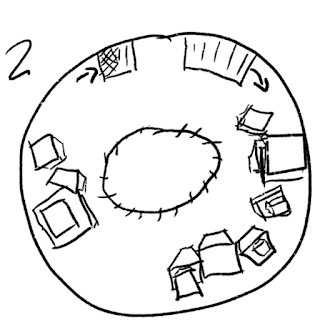 The Stores: On this floor, the central pillar is not stone, but a thick lattice of iron bars. Barely more than a hand could pass through the gaps, but with light the interior can be seen - a cylindrical shaft that passes through the middle of the entire tower. The floor above can be seen through a grate, and the interior of the stone pillars on the floors below leads down like a tunnel to the basement below.

Around the central pillar are cages of the same iron, stacked high and haphazardly. Many are empty, while three die rolls worth contain live rats. There are bags of seed and grain slumped in corners Which look relatively untouched.

Up yet another set of stairs, these rickety and made of metal, is the tower’s top - the nest. 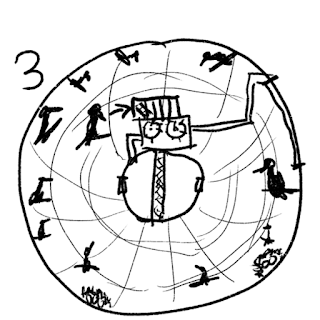 The Nest: Iron stairs lead up into the cage atop the tower. The construction is a mess of thick iron and gears. On perches all about the cage are ravens, each with a small silver manacle around one leg. Feathers and guano litter the floor, and by some perches are small nests with eggs.

The ravens will caw and stir, but not move from their perches, as each has been commanded to stay by its postal worker. If the door to leave the nest is opened, any raven without a manacle will fly away. 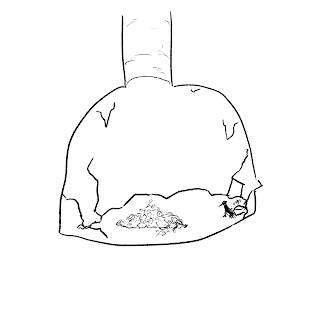 The Basement: A pitch-black cavern in the foundations of the tower. There is a circular hole in the ceiling leading to the central shaft above, and no other entrance or exit.

The floor is littered with bones - mostly rat, some bird. One skeleton is human. It has a torn and rotted postal uniform and three coins in its pocket. Scratched into the floor beside it is a magic sigil - if tattooed on the body, the wearer may turn into a raven at will. Turning back requires a successful Will roll. Any Heretic, or whoever in the party is most likely to, can understand the magic.

A Heretic can speak with the ghost of this person, who floats above their bones. They worked here but felt sorry for the ravens, studied them claiming it was research for the House, found old magic and tried to stage a small rebellion, but were caught and thrown down here to die. They’ll help with the magic and explain it, and also tell the group things about the layout of the tower they might not know, or volunteer to act as a lookout. They can’t leave the tower, but might pass on if they can see the spirit of rebellion is alive here.

There is an old raven down here with a collection of shiny trinkets. Among its possessions are a busted silver manacle, and a silver key marked W which unlocks the corresponding office. The raven is intelligent for a bird, but proud of its possessions. It will trade them for equally shiny items, such as coins, or food, such as live rats.
Posted by D. G. Chapman at 05:10