I came up with this idea for a Mothership module but as you might’ve guessed from the lack of posts here I’ve got a decent bit on my plate - like Journeylands! - as well as a bunch of Mothership projects already (more on all that in due time I’m sure).

Sidenote - never too busy to talk about new projects tho hire me! Graverobbersguide at g’mail dot com

Anyway I don’t feel like I can do much with this concept right now so you can have it, here:

-        Cuffs. Affixed to prisoners’ necks. Calibrated to the lodestone. If activated they time travel, along with the wearer, to the time and place they were in when the lodestone’s last pulse was emitted.

-        Activators. Carried by guards. Activate cuffs from range with electrical signal. Fire as pistol. A lens on the barrel records tachyon emissions and keeps record of successful activations through altered timelines.

When a cuff is hit by an activator, the wearer’s current personal timeline is aborted and their mind returns to their body as it was at 1200 local time. Travellers exist in a new, separate timeline branching from that point.

Events taking place after 1200 in any previous timelines no longer exist in a new timeline, though travellers retain memories. Cuffs from the same aborted timeline transport their wearers to the same new timeline.

Travellers make a Sanity save after each timeline reset vs 1d10 Stress. Players do not need to roll checks if their characters successfully performed the exact same action in a previous timeline. Running time travel can be confusing, but your game will work as long as the rules you use remain consistent.

All you’ve gotta do is write a prison break module, simples. I’m sure you’ve seen enough movies. ideas to get you started:

- This is MoSh, so it’s a private prison. Come up with a security corp that made this tech and give them a catchy slogan (I had one but uhh... spoilers)

- Pepper your prison liberally with details, give lots of points of access/opportunities - players will be attempting the escape over and over. Here’s an excellent video by Mark Brown that’ll guide you through the concepts.

- What might be in a prison? security passes, non-lethal weapons, food, cleaning chemicals, identical uniforms, contraband,

- 1d10 important locations is plenty, plus now you have a random location table if needed. That’s what i did for Ypsilon 14 (which btw Vi at Collabs Without Permission did a lovely video about here, also definitely watch their Mothership review here) 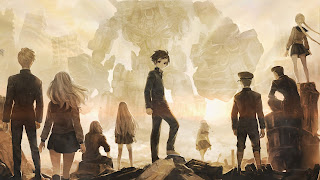 I had this silly anime adventure idea while playing a silly anime game! 13 Sentinels was on my to-play list since release last year and I finally got the chance to get my hands on it. So just like my GM’s Oracle article was an excuse to talk about another Vanillaware game...

(Btw since then Chris McDowall of Bastionland fame has done great things with the concept, not saying he was inspired by me at all haha but check it out for sure)

So 13 Sentinels is a visual novel done as a classic V’ware hand-painted sidescroller. Also there is an RTS kinda side-mode that’s simple and... ok? The main focus though is the story - 13 of them, each with branching paths, each focused around a main character’s daily life interesecting with some sci fi weirdness. Each character also pilots a Sentinel (mech) in the RTS mode, but absolutely nothing here is presented in chronological order - so how and why and when and... what is going on??

There are two moments in good mystery stories, which i will call:

- “Omoshiroi”: Japanese for “interesting”, like how we’d say “...IN-teresting...” with a stroke of the beard. Those moments where something happens you don’t understand yet, but you understand enough for it to pique your interest. A new wrinkle. A clue?

Anyway - if you can get into it, the story of 13 Sentinels has more of both these kinds of moments in each 15 minutes of gameplay than some of the best mysteries have in a whole movie, or season of TV. The narrative presentation allowed by an interactive medium is used deliciously, but it’s not overly conceptual - very standard controls and mechanics.

It’s one big concept album love letter to the last 100 years of sci fi’s greatest hits. A lot to follow, a lot to read, but if this is your thing then... yeah. Wow. This got a Game Awards nom out of the blue among a lot of AAA western titles for a reason.

Go in blind! Have fun x