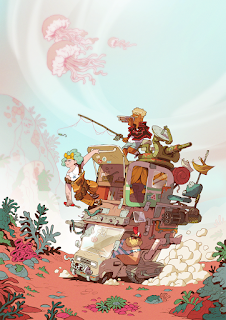 Click here to get it for yourself. If you were a KS backer last year during ZineQuest, check your inbox on there for your discount code.

Email ThisBlogThis!Share to TwitterShare to FacebookShare to Pinterest
Labels: journeylands

At the Gates of Dawn

“Due to the explosion of the Lunar Gate, all data from before 2022 has been lost” - Jet Black, Cowboy Bebop

Meridian is a satellite in stationary orbit around the astral anomaly X-108, a transport-regulated wormhole. Owned and operated by the Qilin Gate Corporation, the station’s central hub is a port offering access to the astral gate.

Airlocked elevators over a kilometre long connect from the zero-G port to the outer ring, a city bathed in X-108’s constant, golden dawn. The centrifugal force of Meridian’s spin creates approximately 1G of gravity on the city section’s inner surface, allowing citizens to traverse its 5km circumference as if planetside.

Once a bustling port, the advent of ship-based warp drive technologies have seen a decline in travel and tourism. These days, only those unable to afford modern conveyance still make use of it, and only those too poor or stubborn to leave still live here.

Qilin take payment via a subscription plan, with members allotted 12 jumps per year through any of the company’s outer rim locations for a monthly fee of 11kcr. There is no cancellation policy.

Thanks to a privacy waiver at sign-up, QGC are able to locate customers exactly using hyperspace latency tracking. As stipulated in the contract, failure to keep up with payments will result in forfeiture of equivalent value in biomass from the offending party. Collector Drone [W: 3(15), C:70 Scalpel, I:80]

So this is a mini setting I’m working on for a Mothership game and I thought I’d share notes so anyone can use it or take bits as needed. I’ll update as I go.
If this were a book I’d include something useful along with that blurb up there, like a d5 table of spaceships you can encounter at the port. But since the Shipbreaker’s Toolkit isn’t out yet I’ll do that another time i guess
That means for now all you’re getting is an intro, sorry! But I suppose this post is good to link back to for other stuff I do in this setting, like an overview.
Expect mystery, investigation, janitorial work, corpo-governmental conspiracy, fancy briefcases, robot butterflies, lamb dumplings and the side effects of psychic psychedelia.
(also right now blogger isn’t letting me make or reply to comments? Idk. But you can still comment if you’d like)
Posted by D. G. Chapman at 08:17 No comments:

Email ThisBlogThis!Share to TwitterShare to FacebookShare to Pinterest
Labels: at the gates of dawn, Mothership

- JOURNEYLANDS #1 will be released soon, backers should keep an eye on KS later this month for info on how to get your copy. I will try and post extra bits for players to use now and then (psssst anyone can do this)

- MOTHERSHIP 1E is approaching. How are you all liking the beta version? I have, uh… like, six? projects in the works for MoSh. Mostly 1st party but I’ll also be releasing my first 3rd party project in 2022, more on that in time I’m sure.

Basically, as if you weren’t already, expect big things from the Mothership. Like… just from the stuff I’m personally working on? Oh boy. You have no idea.

In the meantime have you seen Hull Breach yet?

- THIS BLOG remains a place for me to air notes, work things out and make games in public, ramble when I feel the need. Thanks for your continued attention. I try to only post things I think are potentially useful.

I feel like most people know me for MoSh now, and I haven’t really put much ~content~ on here for that, so this will be rectified. And probably less fantasy bits than in the past? Idk, I write stuff for me first and I’m not currently running a fantasy game so. But hey a year is a long time

- GRAVEROBBERS is still a thing, next stop is a starter adventure but there is no timeline on that. As and when. Free here, always will be.

- Other projects like the d6 duel-clock “souls” game and DEADLINE are still being worked on too, but practically speaking they’re lower on the priority list than things that make money.

- On that - as well as my continued work on Mothership stuff for TKG I would love to work on whatever else you’ve got cooking, get in touch. If you like what I’ve done you can literally just hire me. Graverobbersguide at gmail dot com.

If you can’t pay i will probably still take a look at any serious projects and help, for fun. Especially if you are from any group/identity not typically given platforms. Just hit me up and I’ll give notes on your Mothership zine or whatever it is you’re doing.

- Rebalancing a bit. Less-to-no twitter, everything anyone has ever said about games on there is boring. I’ve always aimed to put real life first and that’s going to continue. Games is just a fun thing to do with people I love, love comes first.

You also might see other artistic projects from me at some point I suppose, like other media, you can ignore those if they’re not interesting to you

I can’t think of what else to say but anyone can just ask me stuff if you have questions! I’m just some guy

I hope you’re spending time/money/energy on worthy causes, chiefly yourself. Let’s show 2022 what true power looks like. Peace and love to all xo