Threads on the subreddit for board games tend to fall into one of a few categories. Is this game any good, framed as “is it worth the money”. This new game is out now/soon, framed as “here’s a thing you can [soon] buy”. Here’s my collection, or “here are the things I’ve bought”. Even the more innocuous posts like personal crafts projects often result in comments asking to purchase the thing someone’s made.

The rpg subreddit, and other online spaces for talking about ttrpgs, aren’t all that different. Online conversations about hobbies are framed around money. This extends to physical spaces, too. In a pre-socially-distanced world, the real-world hubs for the hobby were, at least through the US-centric lens of most conversations, the FLGS (where you buy things) and the game convention (where people sell you things).

As someone who can’t afford to frequent games stores or travel to conventions, I could have seen this focus on interaction with the hobby through commerce as a deterrent, or passive capitalist gatekeeping. Same as any other hobby with a price point - I can’t play golf, and wouldn’t consider trying, because I’m aware of the costs involved. The money means it’s not for me.

As game designers know, if most of your book is combat rules people will think your game’s about combat - and if most of the conversation around your hobby is framed around commerce, people will think they need money to engage with it. People will assume, fairly reasonably, that buying and owning things is the primary mode of engagement with tabletop as a community and, by extension, a pastime.

Luckily, my personal gateway to games was through old hand-me-downs and homebrew, and eventually through stumbling into a sphere of generous, creative writers and designers, happy to build things for fun and share them with anyone who might want them. Free content was my introduction to this hobby and, like any interest, without a suitable introduction I doubt I’d ever have engaged with it.

Free stuff as a gateway is brought up fairly regularly, but the conversation often stops there. The fact that the current most popular ttrpg, 5e, has its basic rules available for free, is mentioned briefly in your average introductory blog post or YouTube video - but the underlying assumption is always that you will, sooner or later, buy things. The starter set is “only” x dollars, or you can use online dice rollers “until” you want to buy your own custom dice set. The assumption is that you will spend money on something at some point.

And, yes, all these prices are relatively low. This is an enormously reasonable hobby, by and large. But any price point is a barrier to entry in a world in which poverty exists. I’m not against creators putting price tags on art to express its value within the restrictions of capitalism, and I’m certainly not against artists trying to use their skills to earn a living and survive. This is how the world works at the moment. Knowing that money sucks ass and that I need it for rent are not mutually exclusive beliefs. Insert Matt Bors comic, etc. But the fact remains that any product outside my price range is by its nature inaccessible. TSR’s greatest and most terrible innovation was turning home games and zines into a paid subscription model.

The thing is that under all this, under all the starter sets and subscriptions, the free SRDs and at-cost PoDs, the limited editions and Invisible Suns, the collections and libraries and d20s made of gemstones... under the restrictions placed on it by capitalism, which are the same ways in which capitalism affects all things, this is a free hobby. Anyone can access it free of charge, and crucially anyone can continue to play, indefinitely, without spending.

There are free games. There are free modules, adventures, hacks. Free essays to read, free conversations to engage in, creators who are open to dialogue. It costs nothing - not nothing but, not nothing until. Tabletop RPGs are, at their heart, entirely separate from capitalism. Not above it or transcending it, not below or restricted by it. They are communal traditions. My game design didn’t start with the first book I bought and hacked, but with my playground games and notes scrawled on stolen paper.

Now, this is obvious, but please, please, support independent creators. I wish I could put out everything I make for free, and I do my best, but that’s just not the world we live in right now. Capitalism uses money to denote value, and so if you feel you’ve found value in this hobby, and are able to support the people who make the stuff you like... well, y’know. Money, mouth. You can start here, hint hint.

But if you, or someone you know, thinks this space isn’t for them because they’ve fallen on hard times, or have never not known hard times, if someone is working class or marginalised or just has better things to spend their money on... this space has no ticket price. You’re already included.

D&D is folk art. It is made of words, the only legitimate barriers to play are accessibility, culture and communication, and capitalist restrictions on our hobby are entirely arbitrary. 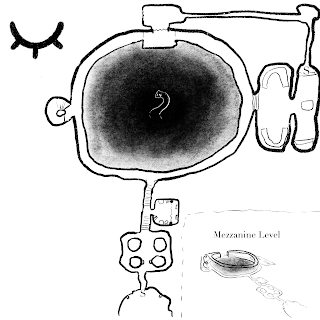 Have changed the intro and various game terms to reflect the new implied setting, the urban gothic fantasy city of Lanton. Prep and Job phases are now Day and Night phases (this was actually what they were called in the first ever version of the game, I just remembered), other shifts in terms and tone. Changed use of die face Unicode for better readability. The Judge is now called the Dealer to fit the casino theme. This should be the final time any of these terms and bits of flavour are changed or updated.

The Grifter is now the Mountebank. No more die roll for items, now gets set vials of potentially useful substances. Other small changes to starting items in some Crimes.

One additional line under Night Phase means that players can now “raise” a fellow player’s roll with some risk/reward cooperative stuff. Not too dramatic but should bet everyone focused in more on the rolls.

This is probably the last “big” change to the Bare Bones until it goes to layout/art - which will be whenever I can afford it. So... we’ll see. Support your local graverobber by redownloading the Bare Bones and tipping a buck or two!

Email ThisBlogThis!Share to TwitterShare to FacebookShare to Pinterest
Labels: graverobbers 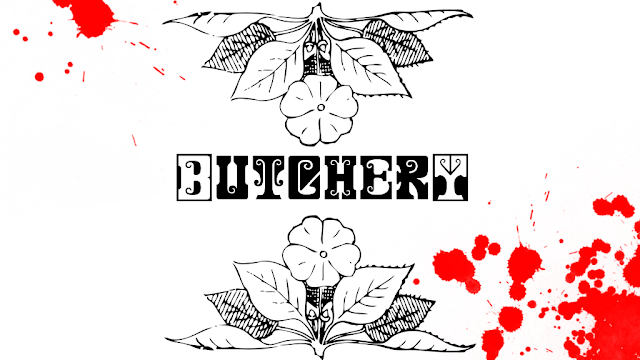 My ZineQuest 2020 project, BUTCHERY, is now available for purchase.

Thanks again to all the backers who made this happen! Check your messages on your Kickstarter account for a code to get the zine for free.