Probably yes. But that won’t stop me from stealing some ideas from video games.

Random encounters are typically seen as a bit of an annoyance, or even an anachronism, in classic dungeon crawlers and JRPGs, interrupting players with a sudden combat screen. Contrary to the tried and true methods of tabletop though, there have been all kinds of advancements and new takes on how to deliver these encounters.

Let’s look at three games with their own takes and try and adapt those ideas for ttrpgs!

Seems like a basic idea but it hasn’t been copied often. Not only does this mesh perfectly with the series’ themes of nature and urbanisation, but it allows for fun level design and leads to more engaging traversal in the overworld.

You can see that one path is overgrown and one is paved - it’s like a dungeon corridor, one fork emitting cold wind and one an eerie warmth. And there are still challenges on urbanised routes, just a different kind. Every new route is full of little decisions.

A couple of other things make the Pokemon approach come together. Firstly, the battle/capture system that is the games’ premise means you want encounters, at least some of the time. Even if you’d rather not fight right now, there’s always the curiosity of finding new monsters.

Also, you can negate encounters entirely with special Repel items. They don’t work if the enemy is way stronger than you, but you can go through most routes with a spritz or two of repel and just… not have to worry about the whole thing. The trade off is money, as these items are consumable and must be replenished.

- make encounters appealing from the outside (everyone has treasure in this world? You can “catch” monsters in some way and add them to your squad?) Keep these rules consistent across all encounters.

- Offer an out. Some magic item that repels monsters in exchange for… money? A quest? HP/your soul…? 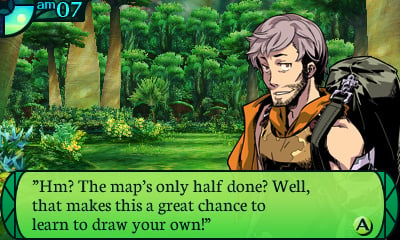 Pretty much the closest thing to an old-school computer dungeon crawler still out there, but not without its updates! Etrian Odyssey has a little indicator in the HUD that changes colour as you traverse its megadungeons. Green: you’re fine. Yellow: hmm. Red: encounter soon! (This has appeared in other games, like Legend of Dragoon).

You’ll never have a random encounter unless the indicator is red. It’s not just a simple clock ticking down though, the encounters are still a surprise each time - you can’t count steps until the next one.

Etrian Odyssey mixes this up by having its big boss monsters, FOEs, never appear in random encounters, instead being represented in the overworld.

Lots of JRPGs have gone the way of overworld encounters as a development of random battles, but FOEs are a mini game unto themselves - way too strong to fight when you first meet a new type, you instead have to study their movements across the map (the map you draw!) and avoid them outright.

And if that’s not OSR…

- Use an indicator system. Eg: Every dungeon turn, roll 1d6, keep all previous rolls in a line. As soon as any of them show doubles, have an encounter and reset the line afterwards.

- Differentiate your big, bad monsters. Remove them from the encounter table and represent them through environmental clues, omens… Talk up different ways to avoid them or at least track their whereabouts/ know when you’re in their lair. One big, unique beast that affects everything around it. 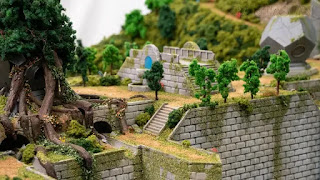 This not only lets you explore the game’s beautiful diorama overworlds without constant interruption, but also functions like Etrian Odyssey’s indicator by acting like a countdown to the big fight.

It also leverages the game’s battle system, which involves aiming attacks across a 2d plane - with more enemies, you can line them up like bowling pins and take out more with each attack. There are also power ups in the Dimengeon to help you out, but you have to hit them with those attacks to get em. Very fun.

- Something appropriate for your game’s world. I’d do like a lantern that can store ghosts, but risks unleashing them all at once if it breaks. It’s Ghostbusters. Maybe a push-your-luck, blackjack type system: draw a card each time you suck up a ghost, if you bust then all your ghosties break free. (If this one sounds like your jam, you’ll love my game GRAVEROBBERS btw, free download here.)

All of these methods involve making the structure behind your encounters more readable to your players and easier to deal and interact with! Encounters aren’t just punishment to throw at player characters, or distinct pockets of gameplay. They can be incorporated into your world and system on another level.