This sneak peek at a bit of Another Bug Hunt (the starter module that will come in the Mothership 1e box set and the reason I haven’t been posting here much lately) got me thinking about character names.

I think naming things in general is something I’m good at, and I know it’s something other people struggle with sometimes. And it comes up quite often in this hobby as a thing that needs to get done.

But unfortunately like most times when people are just kind of good at a thing I don’t think I can really explain how or why I can do it. I just find it easy. (That’s what “style” is by the way, in creative work, leaning into the things that come naturally. If you don’t think you have a style, get lazier.)

I thought maybe if I wrote a bit about my thoughts, those ramblings might be useful to someone? I don’t have a process but if you see something you want to take here, take it. It’s what a lot of this blog ends up being, haha.

And since we’re talking about Mothership characters, here are some I’ve named. Minor spoilers, maybe.

The Haunting of Ypsilon 14

has maybe too many characters, but you know I had to fill out that sweet d10 table. Plus they don’t really serve “character” functions so much as being like… hit points.

I tried to include names from different parts of the world. Since there wasn’t enough space or any real need to detail character appearances, this would suggest that these people each looked a bit different from each other. But again, part of a new whole. Ypsilon was intended as an “introductory” module (to players, if not necessarily to Wardens), and that bit of cultural mish-mash is a good setting shorthand.

Thinking of cohorts of colleagues I’ve worked shitty jobs with myself, and with an image in my head similar to the crew of the Nostromo all sitting round and eating in that early scene, I tried to suggest what Mothership’s future looks like. Basically, a lot like now.

I also made sure to get differently gendered names in there, as well as at least one that could be read as either masculine or feminine. Like how the Alien script was supposedly written gender-neutral, because these things both matter and don’t.

Other than that I didn’t put a lot of thought into each specific name. They’re not references to characters or anyone I know. If I’d had more time maybe I would’ve done that, but I don’t know that it would’ve added anything. If the meme had been meme’d already I would’ve called Mike Dave.

Dr Ethan Giovanni is the only character with a first and last name given. This and the title makes him seem more important, so hopefully the next question, even if it’s subconscious, is “important to who”. Why is this guy written with a family name, a lineage, and the others aren’t? Spoilers: it’s classism.

Speaking of the good doctor and names, on his personal cassette he refers to someone, probably Mike, by a number rather than a name. Worker number something-or-other. Again, the question of who “gets” a name, an identity, and how much, and in whose eyes. In the corporation’s eyes, Mike is a blip on a spreadsheet.

Oh, and Prince. I think that was probably a reference to, y’know, Prince, but also I was likely thinking of that bit in The Simpsons when Santa’s Little Helper has puppies and one is “the puppy formerly known as Prince”. Prince is just a good solid pet name. (My rule for dog names specifically is that it must sound good when shouted across a park.)

One last thing - Kantaro, one of the workers. That’s a surname, not a first name. I think maybe in the back of my mind I thought “oh yeah, at this workplace, there’s probably that one guy everyone refers to by their surname”. American Office vibes, i don’t think there was a character like that in the show but that’s a thing people like that would do. “Hey it’s Johnson, hey Johnson”.

But now I think maybe that’s not something i should’ve expected the average reader (I assume, perhaps uncharitably, white and North American) to pick up on? So maybe it just confuses things. Then again, on those cool fan computer things I’ve seen people do, they list it as his last name. People get it. I’m probably just overthinking.

So next up was

Which, as a module itself, was named by Sean. Because as I recall I think I literally just forgot to name it. So maybe I’m not so good at this after all!

There’s only one character with a person name and that’s Hideo, and I didn’t name him - he’s an NPC from A Pound Of Flesh. So go bother someone else about that. I’m guessing he’s a reference to that one guy.

Mr Goodnight™ is the only other named character I believe. I’m pretty happy with that name. It sounds ominous enough while also sounding like a thing you’d actually call a mascot character, friendly and silly. For a pepsi that makes you sleepy lol. Yeah Hideo’s World is a bit chaotic overall but I’m very happy with the way it does setting.

And, to me at least, there’s something very unsettling about how his name is trademarked in the text itself! I don’t think anyone but me thinks of that as “horror”, but personally that’s one of the most weird and existential things I’ve come up with for MoSh, at least it effects me that way! I think he’s a very good baddie 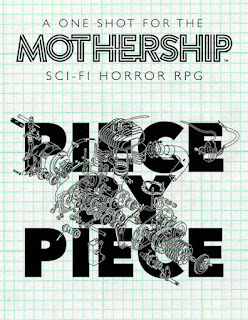 Contrasting Ypsilon, everyone* in Piece by Piece has a first and last name. That’s because this is a murder mystery style adventure, like an episode of the X Files. And the police going over the case in that kind of film or show will always call people Firstname Lastname. Nobody stands over an establishing shot of a crime scene and says “yeah this is the victim, Brian”.

*except Curtis. This isn’t a tie-in to Gradient Descent but it came out around the same time-ish as i recall, and I was thinking about those themes, and the role of the android in MoSh. I like to play with the baked-in setting elements when I can, because it’s cheap, good grist, and Mothership has Androids. An android character playing through this adventure is going to have a very separate experience, I think. I wanted to emphasise that separation.

And “Curtis” specifically because in the Alien movies the androids are named alphabetically, and this was my third pamphlet.

As for the human names, I had a similar tack from Ypsilon. A bit of cultural variety makes it feel more specific and real, and at this point more Mothership. But still just normal people names from real life.

I think I tried to go in on the metaphor layer a bit more this time, not aiming for a “hidden meaning” just adding to a vibe. There are the surnames Nishida, Flores, Fuentes, Dragavei, all plants or Spring- or plant-related words. Growth, life. Human lives being the only(?) living, sentient things in this cold, sterile lab, the contrast between the organic living world and the not. And then we can blur those lines.

Dr Ojo was a more specific choice, she has a Yoruba name. Where I’m from there’s a huge West African population and in Yoruba culture you typically name a child based on the circumstances of their birth.

Anyway, Abidemi means “born without the father”, which ties into themes of parenthood, fathers failing their children and cycles of trauma in the adventure. As does Daedalus labs. (Also the map is a circle, did u notice. Also there’s a bit of a circle/eye/camera thing going on oh ok you’ve stopped reading, that’s fair)

The only other character is ABI i guess. Which is a robot-y name, and also a short form of Dr Ojo’s name. So it implies maybe she made her. Themes innit.

The only other one out right now is 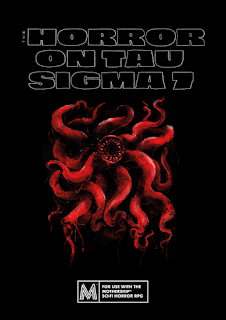 The Horror on Tau Sigma 7

which I wrote for Magnum Galaxy games. Another one I didn’t name, because they already had a name for it. It sounds like The Haunting of Ypsilon 14, which btw I named that because it seemed like a good mix of pulp horror and pulpy sci fi. I think every game needs adventures with names Like That. The Thing of the PLACE.

I specifically chose to not use any, because I thought that would serve it well as an introductory thing. One less thing to worry about whether running or playing.

And so we’re done.

Again, don’t really know what anyone is supposed to learn from this, but hopefully you got something from it. There will be more adventures with more names to come!

Btw, normally when I’m coming up with names for sci fi characters they’re absolutely terrible. Everyone sounds like the worst cyberpunk bounty hunters you’ve ever heard of. Things like Jimmy Lobster and Dusty Marie. I literally just made those up while writing that sentence. I’m doing a stream of consciousness thing. Here’s another one, wonder what it’s going to be, Ronaldo Ballsack.

So if anyone ever wants names like that, hit me up. I bet I could do d100 of em. Wenceslas the Viper. Artificial Ron. Marjorie “Good Grief” Golightly. I’m going to stop now.

(There’s one character with a silly cyberpunk-y name in an upcoming module, actually. He’s an asshole.)

I would be vastly pleased if a d100 table of weird bounty hunter names made its way on to this blog in the future.

Next time I’m feeling appropriately silly I’ll get right on it!